As you might realized, so far we visited what is also known as the gringo trail of Peru: From Lima along the coast to Arequipa, then Cusco and back to Lima or futher on to Bolivia. We however, decided to go to Chile and southern Bolivia first, before going to Cusco.

The way from Arequipa to San Pedro de Atacama is not the most busy one and so it was a bit hard to find how to do it. In the end it was all very easy though and we’d like to share with you how it went:

How to get from Arequipa to San Pedro de Atacama

First you need to take a bus from Arequipa to the border city Tacna. We went with the company Flores overnight at 11.30 pm, arriving at 6 am the next day. Price is 30 soles pp. There is another bus company going there, called Oltursa, which I believe is a bit more high class. Arriving in Tacna, exit the bus station and cross the avenida to your left. There you’ll find the international bus and taxi station. We took a taxi with 3 more people for 20 soles pp and drove 30min to the border. The taxi driver will help you with everything, like filling out migration forms, standing in the right queu etc. Once you checked-out of Peru and checked-in in Chile, the taxi driver will take everyone further on to the taxi terminal in Arica, border city of Chile. Since Chile’s time is 2 hours later, we arrived there around 10am. Easypeasy 🙂

Right next to it is also the bus terminal where we immediately bought our tickets to San Pedro de Atacama for 19500 chilenean pesos (=30 euros). The 12 hour long drive would depart at 10 pm, so we spent the day in the city. Luckily we could leave our backpacks at a storage facility until the night for 2000 pesos. We took a taxi to the center, very cheap compared to other things, only 3000 pesos.

Arica is not a big city and also not very beautiful. There is one main shopping and restaurant street and many cafes with colourful black boards inviting people inside. We had a small breakfast and strolled up the shopping street. We found many chinese import stores, a place that sold different types of soil to grow your weed. There is a mirador you can visit, a few musea and El Cerro de Arica a high point in the city. Up there is a tiny military museum as a remembrence to the chilenean victory over Peru and Bolivia in the pacific war 150 years ago. Back then, the chilenean army invaded Arica which still belonged to Bolivia, and overtook this hill, from where they had a strategic advantage to defeat the enemies. Since then Arica and surrouding mine regions belong to Chile, and Bolivia has no sea access anymore. The roundtour in the museum takes you 15min, if you’re not a military afficionado but the hill is nice to see over the whole area of Arica, which is basically a city in the desert. 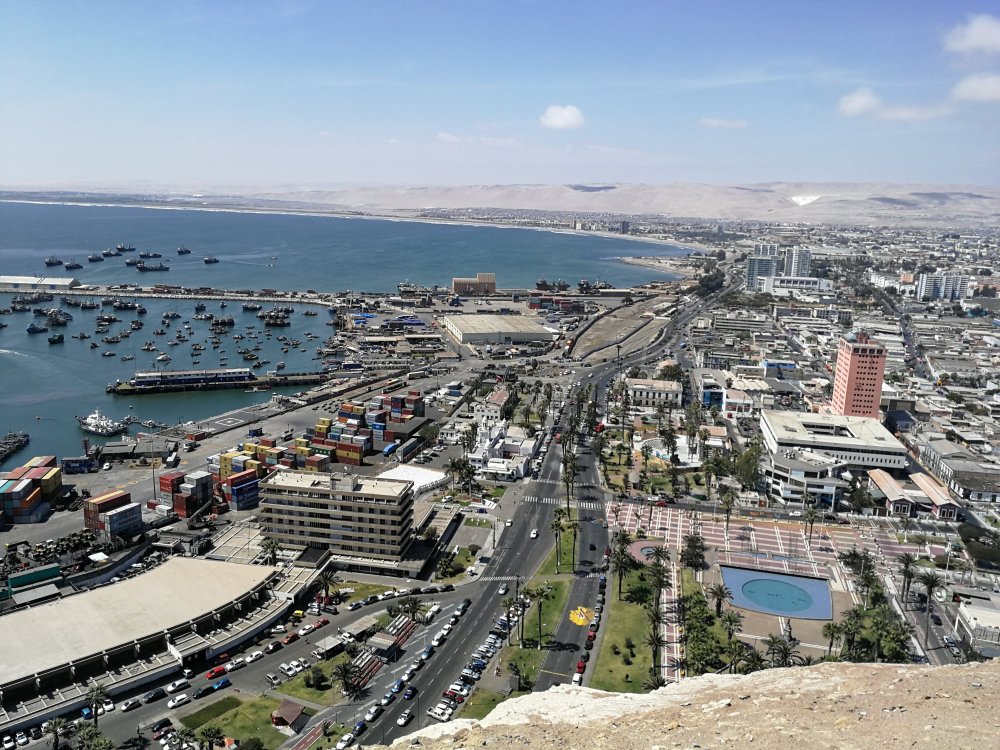 From the cerro we walked down (by the way, take a taxi up, it’s too much effort otherwise) and found ourselves in front of another museum. This place was supposed to become a hotel, but when the foundation was built, they found mummies in the ground! Turns out, it was a very old cementary of indigenous people from even before the incas. Nowadays they put a glass floor on top of the ground so you can see all the mummies (around 30) from close. Some of them have their teeth, even fake hair, still in very good condition.

Well, the day had still not gone by, so we just sat on a bench, watching people and eating a sundae. Very relaxing. Later on we entered a nice restaurant called Cafe del Mar, found a couch spot with plugs nearby and chilled there for another few hours.

Finally it was time to go on. The bus ride was uneventful, except that they make you get up at 3am to pass your bag through x-ray…

San Pedro is super cute! We arrived in the morning and the bus station already had a nice bohemian style. It takes 5 min walking to the center which has basically one main street with all the tour agencies, souvenir shops and restaurants. We stayed at Pangea Hostel, which looked fun and chill online. Unfortunately it was very empty during our stay though. Still, it’s clean, people helpful and has all facilities you could need.

From San Pedro, there’s a lot of day and night tours you can do: Valle de la Luna, Geyser el Tatio, climbing volcanoes and Astronomic tour, to mention just a few. We decided to do the first two and of course also the tour through Uyuni. If you book your tours all at the same place you get some discount, keep that in mind!

The tour to Geyser el Tatio starts crazy early in the morning… They want you to be ready at 5.00 but they only came to pick us up at 6am… Anyways, it’s an hour drive through the still quite dark desert and slowly the sun starts to show as well. It’s a beautiful view! The first stop is at 4700 m.a.s.l. And it’s freeeeezing cold!!

The geysers are cool, not the water spring kind of type but there’s a lot of activity and even baby geysers can be seen. Baby geysers are small spots in the ground which are already warmer because they will soon break open. Apparently Vicuñas (wild alpacas) like to sit on them because of the warmth. After seeing the geysers and getting some explanation you visit the hot spring. Although the sun warms you as soon as you stand in it’s shine, it’s still refreshing to get from the cold air into the warm hot spring. However, you really have to look for hot spots in the water basin. Then finally breakfast was ready, with eggs, cake, bread, coffee and tea. Then on the way back to the village you stop at 2 or 3 places and you especially see tons of vicuñas and sort-of chinchillas. Our guides were great too! Cristobal was a nerdy guy and somehow unintentionally funny and our driver was a character! At the end of the tour Cristobal told us a very nice story about old tribes in the region and in the meantime our driver got out of the car and started playing flute in the background..? Was a nice end for sure!

The Moon valley is worth visiting in the late afternoon. It’s a big area which looks like the surface of the moon or mars. The stones are mostly made of big salt crystals covered with a lot of dust. When you press your torch light on the stone you will illuminate through the stone! There’s not much else to say about the moon valley (except they say it was formed through a big sea millions of years ago), mostly it’s the views that you can/should enjoy in the sunset.

Foodwise I really have to disappoint you. San Pedro and Arica did not show their best foodie side. We were finally so done with the prices and (touristic) menus that we just cooked in the hostel for ourselves – cheap and yummy. I tried an empanada de pico (ground beef and onion filling) but the meat did not taste good at all…

Tips! Rent a van and explore the region on your own! There is a company that rents camper vans and it seems to be the optimal way to visit the Atacama desert.

Personally, I found San Pedro de Atacama overly touristic with lots of “hippies” and people that just got stuck there. Life is more expensive and the tours feel like a marathon.. But, at least we can say we were Chile!